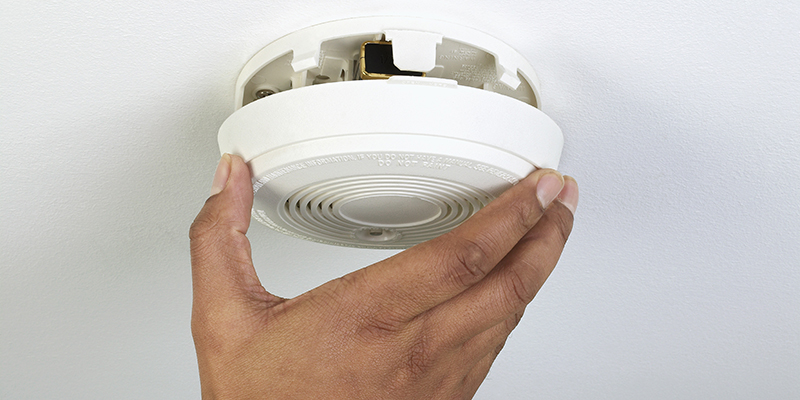 What kind of smoke alarm (smoke detector) should I buy?

Smoke alarms are important to fire safety in your home because, the risk of dying in home structure fires is 55 percent lower in homes with working smoke alarms than in homes with no alarms or none that worked. Buying smoke alarms can be a bit confusing to someone who is not aware of all the different types and the terminology being used. Because of this, I am going to break down some of the most frequently asked questions to help you choose the best alarm.

I want to note that there is a difference between a smoke “detector” and a smoke “alarm”, basically a smoke detector is just a sensor that monitors for smoke and is connected to a whole building fire alarm system, while a smoke alarm has both the sensor to monitor for smoke and the speaker that emits the sound to notify the home occupants.

What are the different types of smoke alarms?

Having the proper number of working smoke alarms installed (regardless of the type) in the correct locations is key when it comes to safety.

There are some different types of alarms that can be purchased that have different pros and cons. The first difference you will see is Photoelectric vs Ionization. The difference between the two types is the sensor that is used to detect the smoke. An ionization smoke alarm is generally more responsive to flaming fires (imagine a fire where you can see the flame), and a photoelectric smoke alarm is generally more responsive to smoking smoldering fires (such as a cigarette).

Ionization smoke alarms utilize a small amount of radioactive material to ionize air molecules into positively and negatively charged molecules that create a small electric current. The introduction of smoke into that ionized air will reduce the amount of current and cause the smoke alarm to sound. Typically, smoke alarms with Ionization detectors tend to be less expensive than alarms with photoelectric detectors. 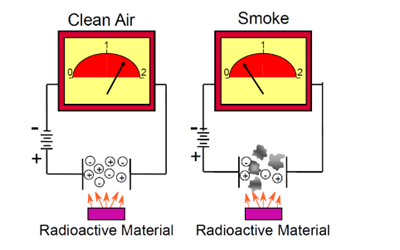 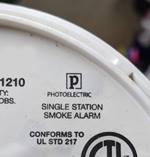 To get an alarm that is just as responsive to smoldering fires as it is to flaming fires, you can get an alarm that has dual sensors. These alarms have both an ionization sensor and a photoelectric sensor that will cause the alarm to sound. A dual sensor alarm provides the best protection and for that reason it is recommended.

There are alarms available that are multicriteria or intelligent alarms, what this means is they use many different sensors such as photoelectric, ionization, and heat along with an algorithm to detect a fire. Because of the multiple sensors, this type of alarm is better at reducing unwanted, or "nuisance” alarms from non-fire sources (such as when you are cooking), it does not necessarily mean that the alarm is able to detect fires sooner.

There are some smoke alarms available that will produce both the temporal 3 pattern (a continued set of three loud beeps -- beep, beep, beep) as well as having a voice announcement that can tell you things like where the smoke is being detected or if there is an issue with the smoke alarm.

What is a combination smoke and Carbon Monoxide (CO) alarm? 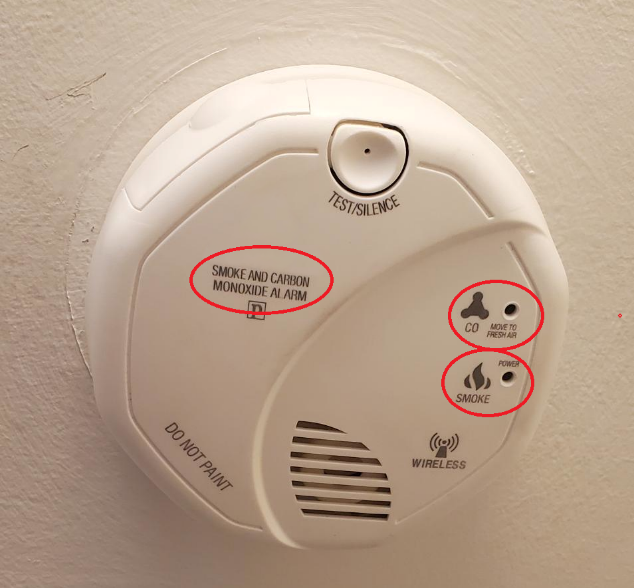 How do smoke alarms get their power?

There are many ways that smoke alarms can get their power.

Some smoke alarms will get all their power from batteries that are replaceable, they can be a 9v battery, AAA battery, AA battery, or another type of battery. These batteries should be replaced at least once a year and the alarm tested every month. 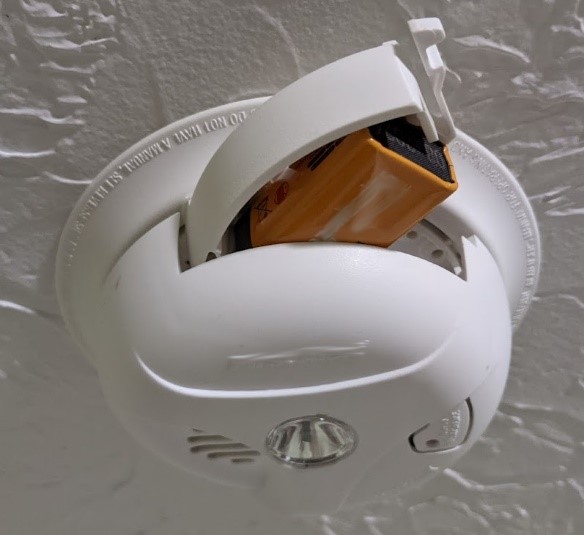 Some smoke alarms come with a sealed non-replaceable battery that can provide power to the smoke alarm for up to 10 years. This alarm does not require the batteries to be replaced, however, you should still be testing them monthly. 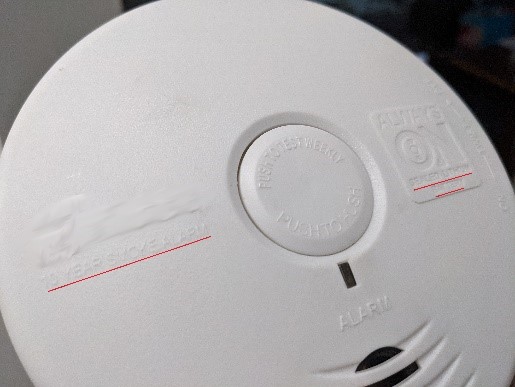 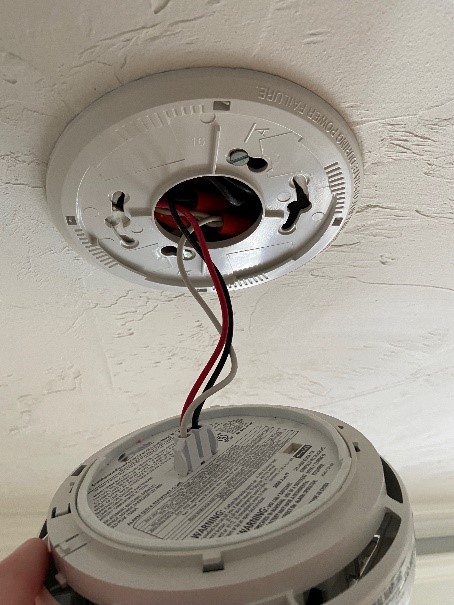 Do I need battery or hard-wired smoke alarms?

If your home has hard wired connections, then you should replace the alarms with hard wired smoke alarms of the same manufacturer. You can use a different manufacturer; however, this may require an electrician to come in and wire in a different plug (also see the interconnection section below).

If you are performing renovations or building a new home, check with the local building department and/or fire department for code requirements.

How often do I need to replace my smoke alarms?

Smoke alarms must be replaced:

How do I know I am buying a quality alarm I can rely on?

Smoke alarms are required to be tested by a third party recognized laboratory to stringent product standards. Make sure that the alarm you are buying was tested by and labeled (shown on packaging and on the label of the alarm) by a recognized testing laboratory. Some examples include Underwriters Laboratories (UL) and Intertek. 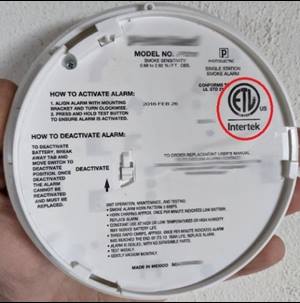 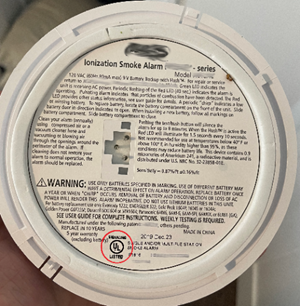 What are interconnected smoke alarms, and do I need them? 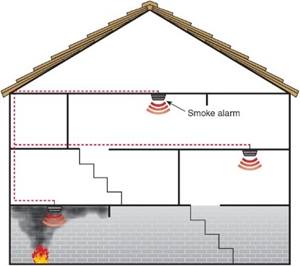 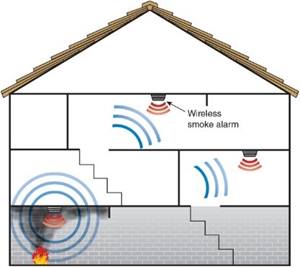 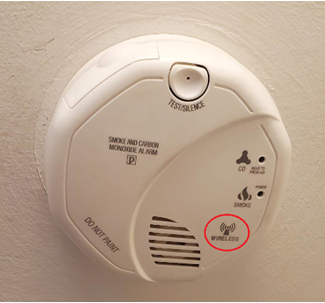 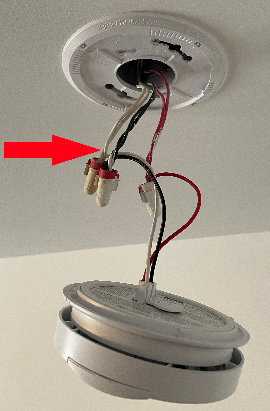 In what rooms do I install smoke alarms?

Check your local building, fire, or life safety codes for your specific requirements, you can call your local fire prevention department as well. But in general smoke alarms need to be installed: 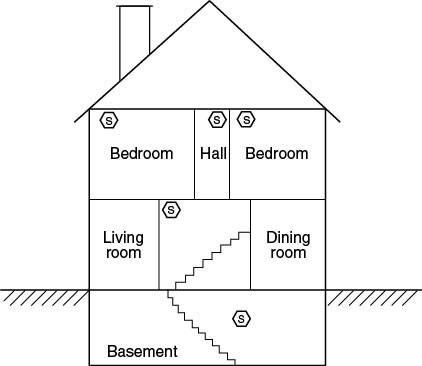 Do I install the alarm on the ceiling or the wall?

Mount smoke alarms high on walls or ceilings (remember, smoke rises). Wall-mounted alarms should be installed not more than 12 inches (300 mm) away from the ceiling (to the top of the alarm).

If you have ceilings that are pitched, install the alarm within 36 inches (910 mm) of the peak but not within the apex of the peak (4 inches (100 mm) down from the peak).

Avoid installing the smoke alarms in places where there is air movement or drafts such as near windows or near the air supply from an HVAC system. 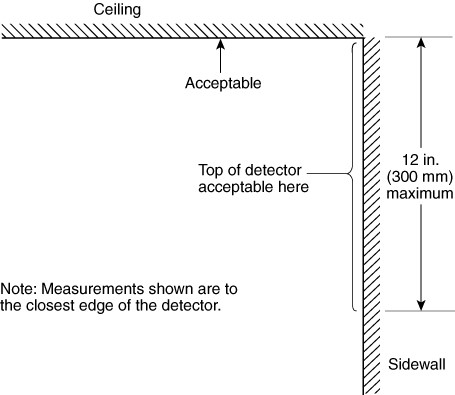 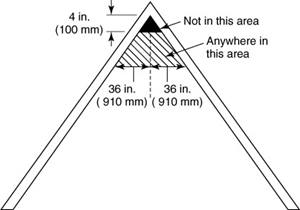 How do I reduce unwanted alarms?

If you are required to place a smoke alarm near cooking appliances or the door to a bathroom based on the arrangement of your house, there are some things to keep in mind to reduce any unwanted alarms. 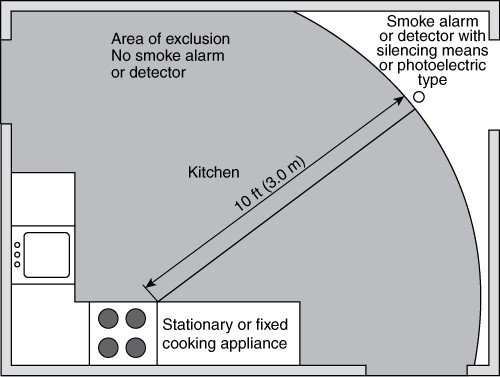 If placing a smoke alarm in the hallway near the door to the bathroom with a shower in it, you should place it at least 36 inches (910 mm) from the door to reduce the impact of steam from the shower on the alarm.

What if someone in my home is deaf or hard of hearing?

There are smoke alarms and alert devices that alert people who are deaf or hard of hearing. These devices include strobe lights that flash to alert people when the smoke alarm sounds. Pillow or bed shakers designed to work with your smoke alarm also can be purchased and installed. 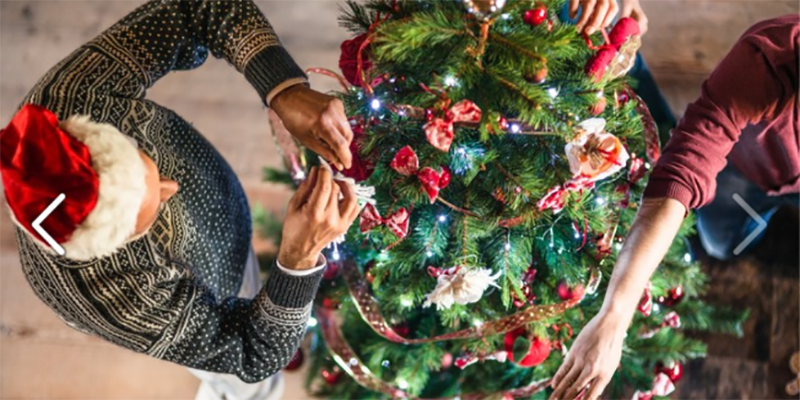 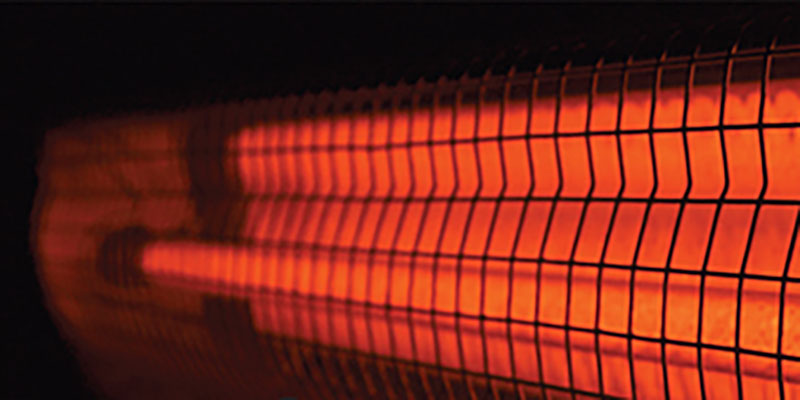 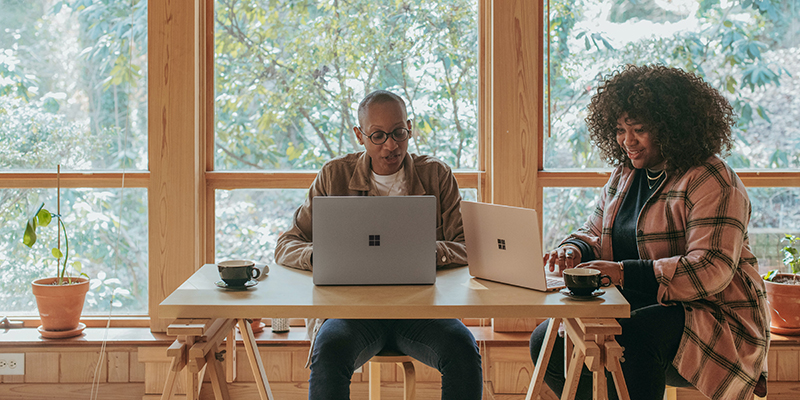 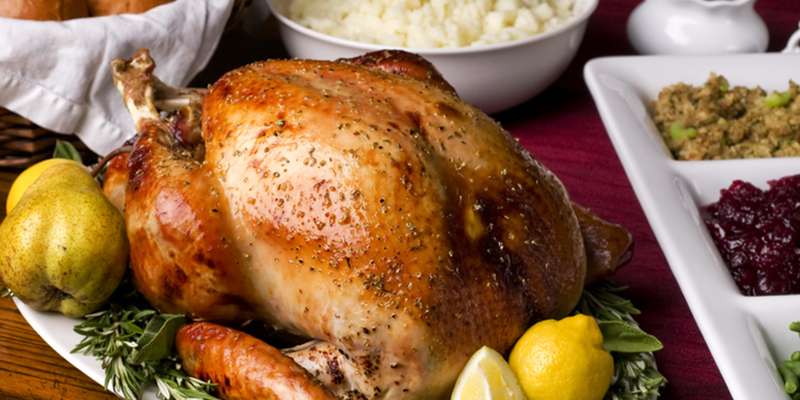 Reduce the Risk of Home Fires in Your Community This Thanksgiving, the Leading Day of the Year for Home Cooking Fires 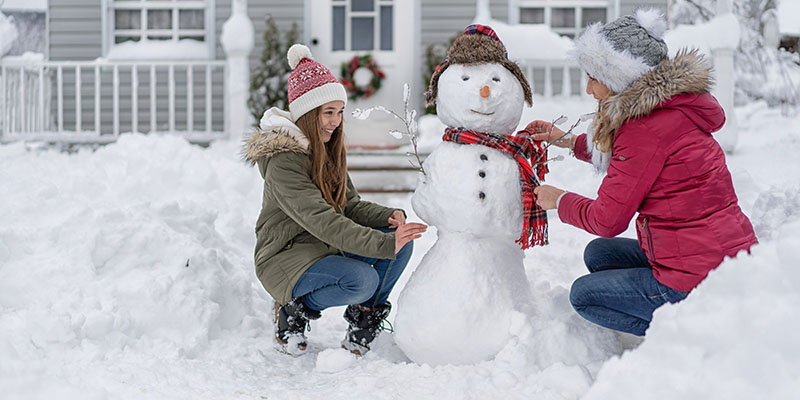 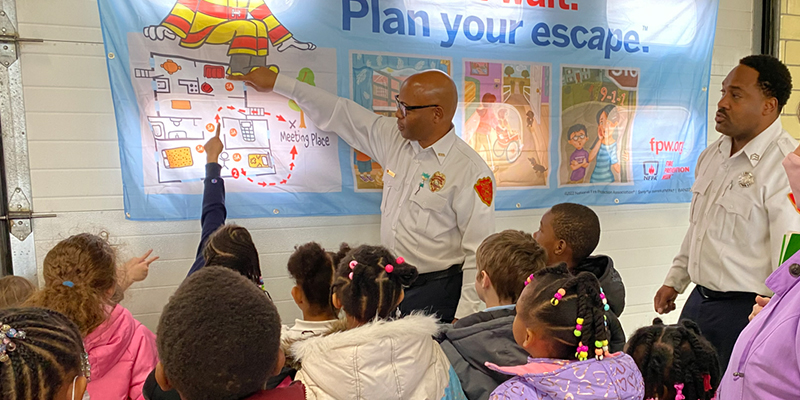