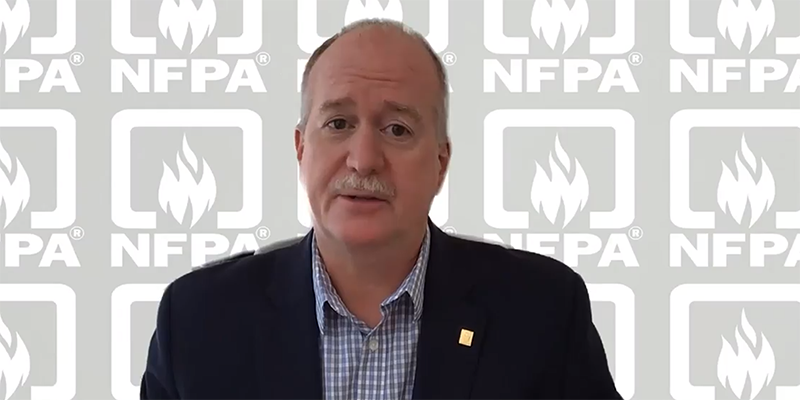 Last week, NFPA® President and CEO Jim Pauley and I participated in a Fire Stop Tour in New York, Philadelphia, and Washington, DC. The tour follows the US Fire Administrator’s Fire Prevention and Control Summit in October, the first such event since the 1947 Conference on Fire Prevention and Control hosted by President Truman. The October summit included a roundtable discussion where national fire service leaders made recommendations to national leaders that are now the national strategy to address the fire problem that were announced on the tour.

The event in each city began with US Fire Administrator Dr. Lori Moore-Merrell providing an overview of the fire problem and proposed action steps. She was joined by representatives from other national fire and safety organizations, including NFPA, the International Association of Fire Fighters, International Association of Fire Chiefs, the National Volunteer Fire Council, UL Fire Safety Research Institute, the National Fallen Firefighters Foundation, the National Fire Sprinkler Association, and the leaders of the local fire departments in New York City, Philadelphia, and Washington, DC.

These events paid tribute to the 17 people who died last January when fire broke out in a Bronx apartment building, the 12 residents who died just one week earlier at an apartment fire in Philadelphia, and the many others across our nation who died or were injured in fires last year, some of whom were first responders.

Jim’s remarks focused on two key areas. The first was that the tragic events in New York and Philadelphia highlighted an unfortunate truth about fires: they disproportionally impact our most vulnerable populations—older adults, children, people of color, low-income populations, and people with disabilities.

In a recent report called “The Invisible U.S. Fire Problem,” sponsored by NFPA, it was made abundantly clear that the demand for safe, affordable housing in the United States often outstrips the available supply.

Facing this reality, people often find or create alternative living arrangements, which may fall outside the purview of legal systems of land ownership and tenure, and of planning, land use, building, public health, and safety regulations.

These fire problems might seem invisible at the national level, but they are plaguing American cities, undermining the lives and livelihoods of fellow citizens, and having negative impacts on the fire service and neighboring communities.

There is a dire need for research, policy, and action to better understand and address these local fire problems.

The second key area Jim talked about was the significance of using and enforcing the most current codes and standards. NFPA has a comprehensive set of codes and standards that influence fire, electrical, and life safety in the built environment.

During the tour, Jim and I noted one key way to create safer communities— incentivizing local jurisdictions to implement and enforce these latest codes and standards.

Our country is dotted with substandard buildings—the result of the use of outdated codes, lax enforcement, and amending out key safety provisions like those that require sprinklers in all new homes.

For example, right now there are more than half a million public housing units in the United States that remain unprotected by fire sprinklers because they were constructed before a 1992 Congressional mandate for sprinklers in new multi-family housing units.

And as we know, buildings with sprinklers experience civilian fire death rates at 89 percent lower than those without them.

The main points we worked to drive home during this tour were that safe housing and affordable housing should not be mutually exclusive, and that fire safety in public housing must receive continued, heightened attention.

In his video, Jim summarized the task at hand: “As a nation—with the drive and the support of organizations like NFPA, whose very mission is devoted to eliminating death, injury, and property and economic loss—we have a lot of work to do. This week’s meetings with fire safety advocates—and the painful memories of all those we have lost to fire has only strengthened my resolve and determination that all of us working together in tandem—can have a significant impact to reduce the heavy burden of fire in our communities, our nation, and around the world.”

A video of the full press event in Washington, DC, is available on C-SPAN.